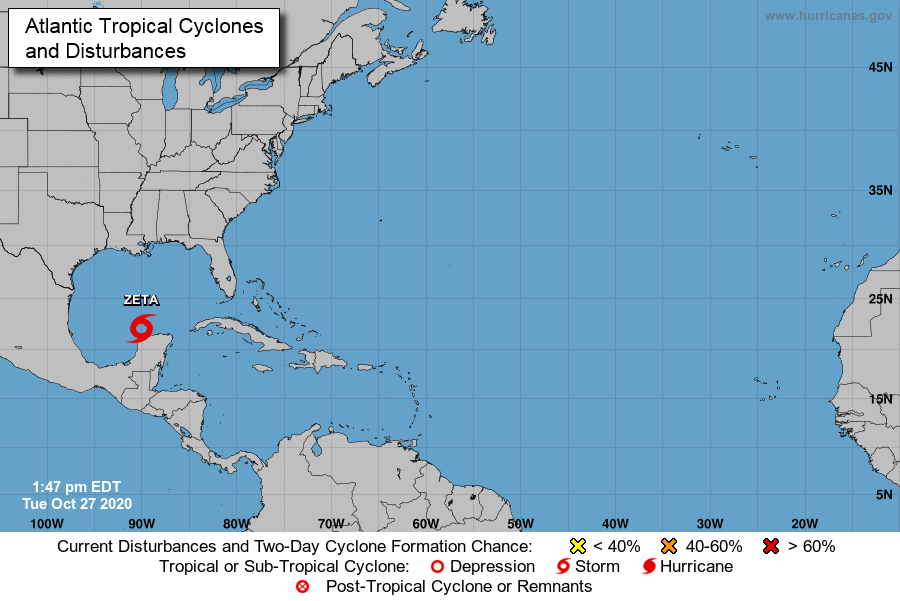 Areas of the Gulf Coast, particularly Louisiana, have been hit hard this year. Zeta is now fast approaching.

Just as the Gulf Coast was slowly recovering from the damage that Hurricane Laura left 6 weeks ago, another hurricane approached the coast. And Tropical Storm Zeta is moving in quickly this week.

Following the path of Hurricane Laura, Hurricane Delta struck the Gulf Coast. The hurricane first stormed through Jamaica, Nicaragua, the Cayman Islands, and Yucatan Peninsula, Mexico. By Oct. 9 the hurricane landed in Louisiana and Texas.

Delta is the 10th hurricane this year to hit the United States, it broke a century-old record. It was also the fourth hurricane to strike the exhausted strom state Louisiana this year — which has never happened before.

Despite only being a category 2 hurricane with winds up to 100 mph, they were no match for Hurricane Laura’s 137 mph. However, Delta was still able to leave the coast with a deep scar.

According to PowerOutage.US by CNN, the Gulf Coast had “more than 140,000 people remaining without power on Monday.” In Louisiana, 109,000 people were powerless as of Monday 9 p.m. (ET), Texas had roughly 21,000 and Mississippi had roughly more than 10,000. Down in Mississippi, 42 homes were damaged by Delta reported by the Mississippi Emergency Management Agency.

Ten tornadoes were also spawned and reported from the Gulf Coast to the Carolinas. According to the National Weather Service, at least two of those tornadoes in north and central Georgia injured two people on Oct. 10. Then as of Oct. 12, Delta was confirmed to have taken four lives.

Delta left southwestern parts of the state with 17 inches of rain. Lake Charles, Louisiana, one of the heavily targeted areas of Laura, was struck once more. Flooded roads, fallen power lines and displaced many wildlife were seen in the aftermath of the downpour. Oct. 11, Louisiana Governor John Bel Edwards said that “more than a hundred roads and 35 bridges were closed.” This not only presented more difficulties for travel but raised a higher risk for COVID-19 to spread with more communities displaced from the storm.

After Delta, it brings the total hurricane damages to $26 billion for this year. In Claims Journal, it was estimated by CoreLogic (a reporting analytics company) that Delta caused $700 million to $1.2 billion losses from wind damage and storm surge alone. In addition, there was a $800 million to $1.5 billion damage in offshore structures. This piles onto the estimated $8 billion to $12 billion that Hurricane Laura caused less than 2 months ago.

On Oct. 14, according to KPLC 7 News, Gov. Edwards requested a Major Disaster Declaration for federal government assistance. Edward says, “The people of Southwest Louisiana are strong and resilient” but they’re asking for all the help they can get to rebuild the damage to their communities. On their road to recovery, “I also met with the FEMA administrator this week and discussed the need to address the complications and financial challenges following these back-to-back storms” says Gov. Edward.

While still recovering from Hurricane Laura and COVID-19, Edward’s hope is that FEMA Public Assistance would aid in the debris removal and emergency protective services, and the FEMA Individual Assistance would help those who were impacted in the five parishes (Acadia, Calcasieu, Cameron, Jefferson Davis, and Vermilion) which were the most impacted areas.

The National Hurricane Center is currently tracking Zeta as it moves up the Gulf of Mexico. It may hit Lousiana.