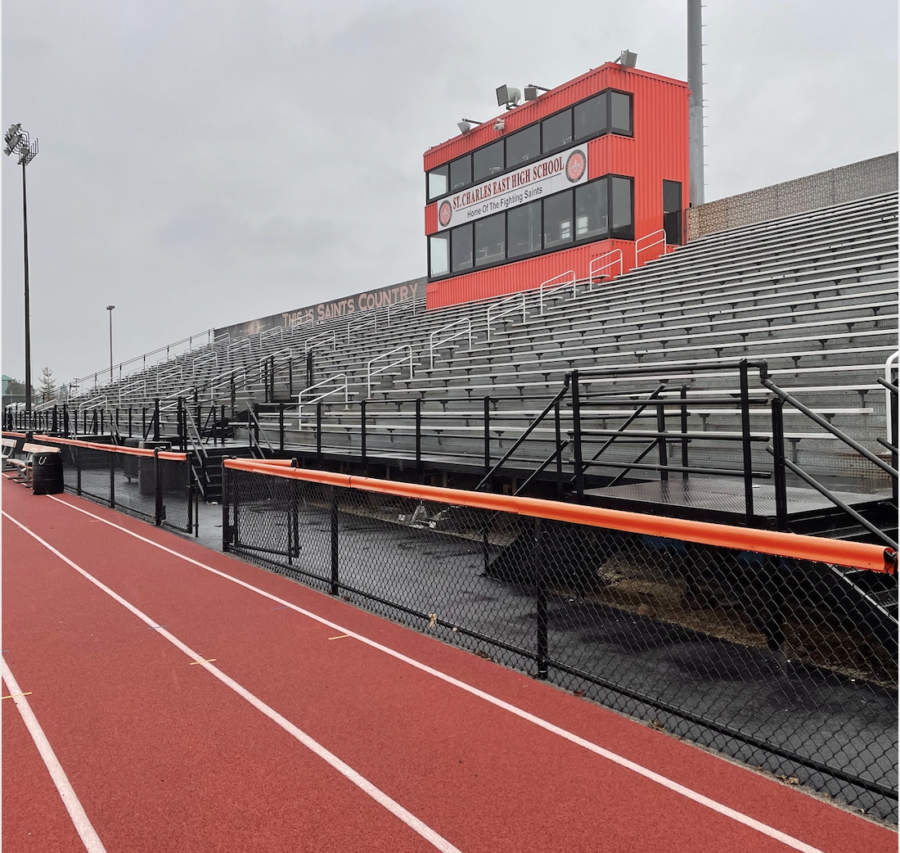 The East stands have been empty of fans for over a year. With new IHSA regulations, they will once again seat spectators. Photo by Katie Kempff.

On March 8, the Illinois High School Association, or IHSA, held a meeting that would yet again change the regulations for high school sports. This time, though, they had good news for the anxious students and families awaiting their decision.

This means that sports such as football, soccer, lacrosse, baseball, track and field, and boys tennis can now have an increased amount of spectators.

Jacob Boecher is a senior on the East soccer team. He is excited about the new rules for fans.

“I think having fans, regardless if they are parents or students, is great not just for our program but for the community as a whole.”

Fans are an important part of sports. A lack of spectators, particularly of parents, has been one of the most difficult parts of COVID-19 for many students.

“It gives everyone something to rally behind during such a tough time,” said Boecher. “[Fans] give us more motivation to succeed.”

Boecher also thinks that fans are beneficial for the team’s performance. “Fans always have an impact in our performance early on.” he said. He added that the energy which fans bring to games helps the team to play better.

Boecher is particularly aware of the impact fans can have on morale. “As a senior,” he said, “it is even more special …  to see people up in the stands supporting us and truly wanting us to succeed.”

East is still developing a plan regarding student attendance at sports games. Currently, the East Athletic Department is allowing for student attendance at football games, but not for other sports. A select number student tickets are available for each football game, and they must be secured in advance through Mr. Sommerfeld and the Athletic Department. Seniors will receive priority access to the tickets.

As more students, friends, and family are able to attend games, Boecher said that “[the team] hopes more people come to support [them].”

Currently, outdoor sports are the only ones that have changed their spectator regulations. The guidelines for indoor sports will remain at the current level, with a maximum capacity of 50 at indoor venues.