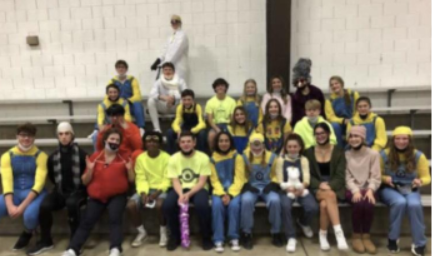 The Peer Leaders hanging out for a fantastic and frightful hallo-day. Photo courtesy of Aubree Pihl.

Peer Leadership (PL) is a mentorship program at East where upperclassmen are matched with freshmen. Each pair is assigned to a group of other matches that they eat lunch with at school and participate in other activities. One of these activities is the Halloween Party.

The Halloween Party is a gathering of all the PL groups. The party went on from 7 to 9 PM and was the first halloween party in two years.

Monica Salonga is a senior and leader in the program.

“It was pretty good,” Salonga said, “especially because it was in the sports complex. It was a big area because we usually have it in the main commons.”

Teachers James Reed and Andrew Johnson, directors of the PL program, set up the games and plan the PL parties. They provide the necessary items for the games such as oven mitts, pencils, and spoons.

Each group decides on a costume that they will dress up as and perform a skit at the party. The group with the best costume and skit wins after teacher advisors vote on their favorite. This year, there were a wide variety of costumes including boxers, inmates, Christmas, Phineas and Ferb, and Despicable Me.

The groups compete in activities such as spoon races, attempting to pick up a pencil with an oven mitt, and trivia. There are winners for each of these games, and points are awarded to each group based on their place. The group with the most points overall wins the Candy Cauldron.

Another large part of the party is the donation of canned food to the Salvation Army. Each group collects as many canned food items as possible. This food drive is also a competition, which helps to increase the number of donations received. Whichever group donates the most cans receives first place, winning bragging rights for the rest of the year.

The group with the most donations was the group led by advisors Robert Klemm and Sharon Stewart. The group also won first for the skit and costume competition after performing the Phineas and Ferb theme song. With a total of 22 points, the team that won the overall group was the group led by James Reed and Kelly Pursel.