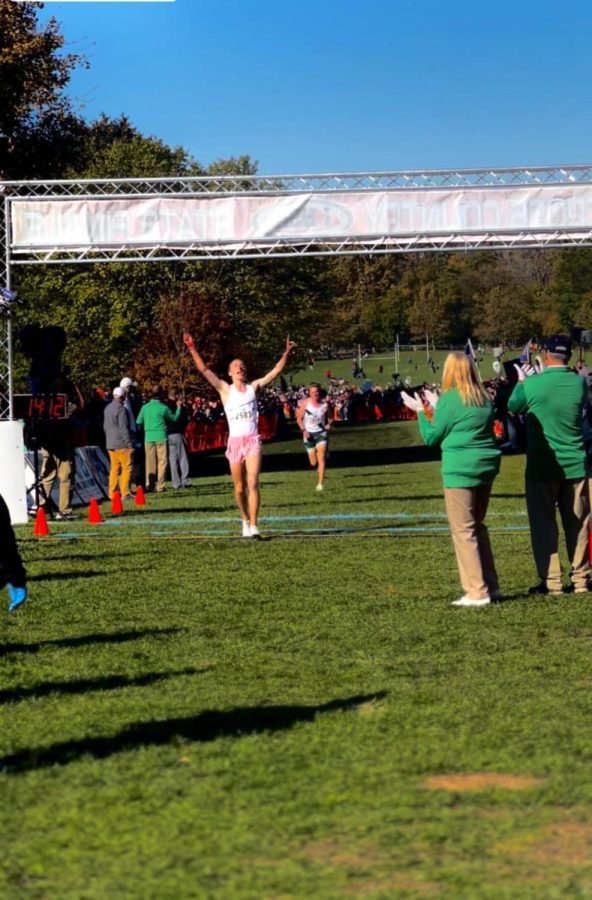 Micah Wilson running on the course at Detweiller Park, where State is held each year. Wilson has signed with UW-Madison Track and X-Country. Photo courtesy of Micah Wilson.

Micah Wilson is no stranger to high pressure races.
Since the fall of his freshman year, Wilson has run at every cross-country and track IHSA State Final, except for the two which were cancelled in 2020 due to COVID-19.
As a sophomore, he was seventh at State in cross country. As a junior, he was State champion in the 3200 meter race in track.
To finish off his cross-country career at East, Wilson won the 3A State championships in November. He ran the 3-mile course in 14:11.2​​.
“These past four years have been an amazing experience,” Wilson said.
“Running my last cross [country] race as a Saint was a special feeling.”
In particular, Wilson said that “the whole State trip was emotional knowing that it was the last dance with the boys. It was really special to win it for the team and the school, and I was just happy to make my coach and family and teammates proud.”
Next fall, Wilson has committed to run at the University of Wisconsin-Madison.
“I’m really excited about Madison,” Wilson said.
“I love the team, the coach, the city, the campus, everything….”
He said that he was supposed to visit a few other colleges and see their teams before committing. However, he was so impressed with Wisconsin and passionate about his place on the team that he “couldn’t see himself anywhere else.”
One notable factor which drew Wilson to Wisconsin was Bob Liking, former St. Charles East student who is currently on the Wisconsin cross country and track teams. Liking was recently the NCAA Big-10 Champion in cross country, completing 5.2 miles in 24:38.7.
When Liking and Wilson were at East, they won the cross-country championship as a team.
“I love thinking about running with Bob again. We won a state championship for East, and now we’re trying to win a NCAA title for Wisconsin,” Wilson said.
Wilson has a specific inspiration during training and races: his girlfriend, Megan.
“In 2018, freshman year, Megan was diagnosed with cancer after the doctors found a tumor in her spinal cord,” Wilson said.
“About a year later, after surgeries, chemotherapy, and radiation therapy, Megan beat cancer, until earlier this year. Back in February, three days before my first indoor race, an MRI showed that the cancer was back.”
In March, Wilson said that Megan had a surgery to remove the majority of the tumor. Since then, she has been in a wheelchair.
During last spring’s track season, Megan was only able to attend two races, as she was in Seattle for a clinical trial.
This fall, though, Megan was able to be at almost every cross country race, including State. Wilson said that she is his biggest inspiration.
“I think about her fight, her strength, and her determination during every race and every workout. To have her at State was a really special thing.”
Even with his success this fall, Wilson continues to look forward. He has a number of goals for track season.
“I have some big goals, including a sub-4:10 indoor mile, sub-9:00 2 mile, defend my 3200 [meter] state title, and hopefully pick up one in the 1600 [meter].”
He has a final goal for the mile, too, but is keeping it under wraps — for now.
He said that he will “surprise people with that this spring, hopefully.”