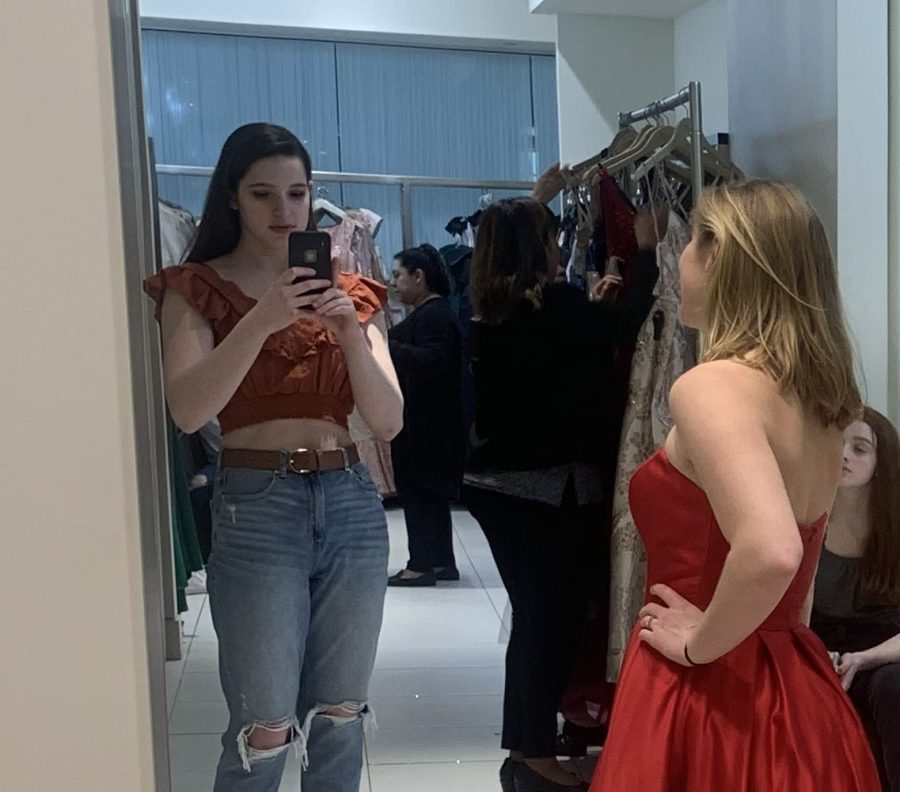 Mara Kinsey shopped for a prom dress with friends before the stay-at-home order. She, like many seniors, will be missing several long-awaited senior events.

At first, the school cancellation was for two weeks. Then it stretched to the end of April. Finally, on April 17, Illinois Governor J.B. Pritzker announced that schools would remain closed for the rest of the year.

Around the world, the coronavirus pandemic is drastically changing daily life, and St. Charles is no exception. East students have transitioned to an e-learning format, and spend days at home rather than in classrooms or at extracurricular sports and clubs.

This means that students are also missing out on important end-of-year events. One event in particular is having a large impact on junior and senior students: the cancellation of prom.

Even before Pritzker’s official suspension of in-person classes through the end of the year District 303 had decided to cancel prom. On April 9, an email from Principal Richter was sent to junior and senior students.

“Given the directives from the Governor and CDC,” the email read, “Prom and Post Prom this year on May 2, 2020 must be cancelled.”

This decision was one that was not unexpected to East students and families, but still heart-wrenching. Lisa Dandre, East’s Assistant Principal for Student Life, describes how that decision was made.

“When the Governor canceled in-person school for the month of April, we started talking about [canceling] Prom,” Dandre says. She explains the extensive logistical difficulties that would have occurred if we had gone back to school on May 1st and tried to hold prom the next day.

“Prom ticket sales happen in April.  Prom was scheduled for Saturday, May 2.  If we were to be able to return to school on Friday, May 1–how would we sell tickets and how would we organize tables, meals, etc. in one day?”

And then there is the biggest issue, the reason we were originally out of school: the ban on large gatherings due to COVID-19. Dandre says the district leadership addressed these concerns as well.

Even though the cancellation is for student safety, juniors and seniors are understandably disappointed at the loss of an iconic high school milestone.

Across the country, seniors graduating in 2020 have been identified as the class who lose the most. According to Dandre, “this is a very tough end to senior year for every senior in the country.”

Owen Mruk is one of those seniors at East. He says that prom and graduation were what kept him motivated throughout his senior year to keep up with his work.

Mruk says that “people sometimes quote the second semester of your senior year as the most meaningless part of school — but everyone also follows up with ‘at least you have senior prom and graduation.’”

In the last few months of high school, Mruk says prom “gives you motivation to do the work you’re doing, and we don’t have that anymore. It’s hard to find motivation to do my work right now since there’s no reward for being a senior. We don’t have anything to look forward to.”

But seniors are not the only group impacted. Mara Kinsey is a junior who is graduating a year early — she will not come back to East for her senior year. As such, she is also among the most disappointed in the situation.

“I couldn’t go last year as a sophomore, so I never got to go … I’m really disappointed it got cancelled because I’ll never get to go to a prom,” Kinsey says. For her, as with many other students, prom symbolizes a lot more than a night of dancing.  “I just feel like I never got that last magical night of high school to end my years at East.”

“There is no financial loss/burden for any of the classes, school or Student Council,” Dandre said. “Hilton Oak Brook Hills Resort transferred our deposit for this year and will hold the same room/meal price/contract for May 1, 2021.”

She continued to compliment the venue, which was going to be new this year after the closing of Pheasant Run: “Hilton Oak Brook Hills Resort was very understanding of our situation and very accommodating.”

Certainly, the cancellation of an event that epitomizes junior and senior year of high school is disappointing. However, with the world in such unprecedented circumstances, students also understand that safety has to come first.

“I understand why it had to happen,” Kinsey said. “It’s important to keep everyone safe.”

For some students, missing prom has little impact. As Dandre says, “not all students go to Prom – it’s a personal decision.” One thing is true for all students, whether or not they feel personally affected by the prom cancellation: “The entire end to this school year is a disappointment,” Dandre says. “It is a very sad and scary time.”

At least, for most sophomores and juniors, there is the opportunity to go to prom next year. Hopefully, the whole world is back to normal by then — especially here at East.