Speak All About It!

A review of the Speechies’ 2020 team season 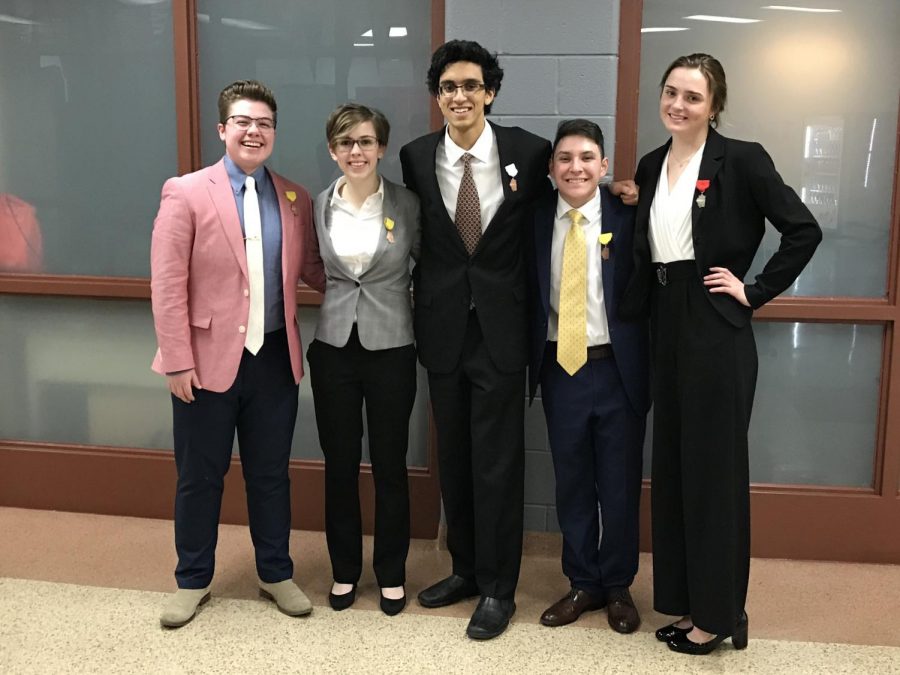 Imagine this: you’re sitting in a room with complete strangers when suddenly your name is called to make a speech about something you know nothing about. But this isn’t just some exercise in overcoming your fears–this a competition, and your every movement, word, and thought are going to be ruthlessly torn apart by a panel of judges. You’re probably already beginning to sweat.

It’s no secret that public speaking is one of the most commonly held fears around the world. A 2014 study from Chapman University even found that more Americans fear public speaking than other perennial favorites like bugs, snakes, and heights.

So surely there’s nobody who would voluntarily submit themselves to the kind of torture that was described above. Right? Think again.

East’s Speech Team loves the opportunity to speak before a crowd. The team is composed of 20 or so “speechies,” as they are known, who compete in local and regional competitions in a variety of events.

The team has been gaining more and more recognition over the past few years as it added new awards to a growing list of accolades. Just last year now-senior Katie Wixted earned a trip down to the State Competition in Peoria to participate in the Radio Speaking event.

Hopes were high going into this year’s Regional Competition, as the team sought a similar result–that elusive ticket downstate. But having been placed into a new division this year, the team would face a new dynamic; they were an underdog. They would now have to prove themselves in an arena of larger schools with more potent speech teams.

The stage was set for Huntley, where the competition would take place.

“If I’m being honest I went into Regionals very nervous [and] secretly anxious,” said senior Joe Maldonado, who was competing in the Humorous Interpretation and Original Comedy events.

Vijay Krishnan, also a senior, echoed his teammate in his nervousness. But he was also cautiously optimistic, noting that the Extemporaneous Speaking event he would compete in included some speakers he had beaten before.  “My main goal was to prove to myself I had gotten better than last year,” he said, “so I wanted to get at least third place.”

But even a fourth place finish in each of their respective events would be good enough to push him and his teammates through to the next stage of competition–Sectionals.

The team was going to Sectionals.

Now the nerves really kicked in. The competition at Sectionals would be much stiffer than at Regionals. The team was now pitting themselves against some of the best speakers in northern Illinois. It was safe to say they would have to be on the “A” game if they wanted that ticket downstate.

“Honestly, I didn’t think I’d even make it into the final round,” admitted Krishnan, who had already outperformed his own predictions.

Boarding the bus for the long ride to Freeport, Coach Court Burkhart rallied his team.  Despite having only scrapped through at Regionals, he “believed a few team members could break through to State if they did their best and got the right judges.”

Maldonado understood the stakes as the competition began.  “I took every round one step at a time and [knew I] couldn’t get in my head.  I went into each round not thinking that it could be my last.”

He had prepared a comedy skit that was sure to wow the judges. Meanwhile, Krishnan had crafted a compelling argument that would surely provoke resounding applause. Wixted followed up the rear with a radio broadcast that was certain to be a hit.

All that was left to do was perform.

As they took to their feet, they settled their nerves and began. The words came at first slowly and with great effort.  But as they went on, each word was spoken with more confidence, more conviction. Their logic was agile, their persuasion convincing. The judges would have to notice.

But this time a 4th place finish wouldn’t suffice. They would have to place in the top 3 during the final round to earn the ticket downstate. It was going to be a fight.

Both Olson and Maldanado fell in the preliminary rounds. If there was any hope left, it lay in Krishnan, Wixted and Kempff. The results began to roll in.

Wixted was next. 6th place as well. They dropped further.

Kempff was last to be announced. 4th place. They hit the floor.

They boarded the bus home in silence. They had come all this way–put in all those hours and hard work–only to come up short. It was an especially painful thought for the seniors, for whom this was the last speech event of their high school careers.

Despite the disappointing result, the team is hopeful for their future. They have a base of young, developing speakers and a group of experienced returning members that will certainly give them a competitive edge.

Burkhart says the team as a whole has been improving over the past few years, and he “know[s] that as that trend continues [they] will send more students to State.”

As for those seniors, they will remember the family they’ve made with the team more than any competition.  “The community has been great….Speech Team took me straight under their wing and helped push me forward,” said Krishnan.

“Speech Team attracts so many different kinds of people, and I’ve loved getting to know all of them,” said Wixted. “I highly recommend it to anyone looking to try something new.”

East’s speech team is coached by English teachers Court Burkhart, Mildred Combs, and Briann Britton. It meets after school on a weekly bases. This year there were 19 members on the team competing in a variety of events.