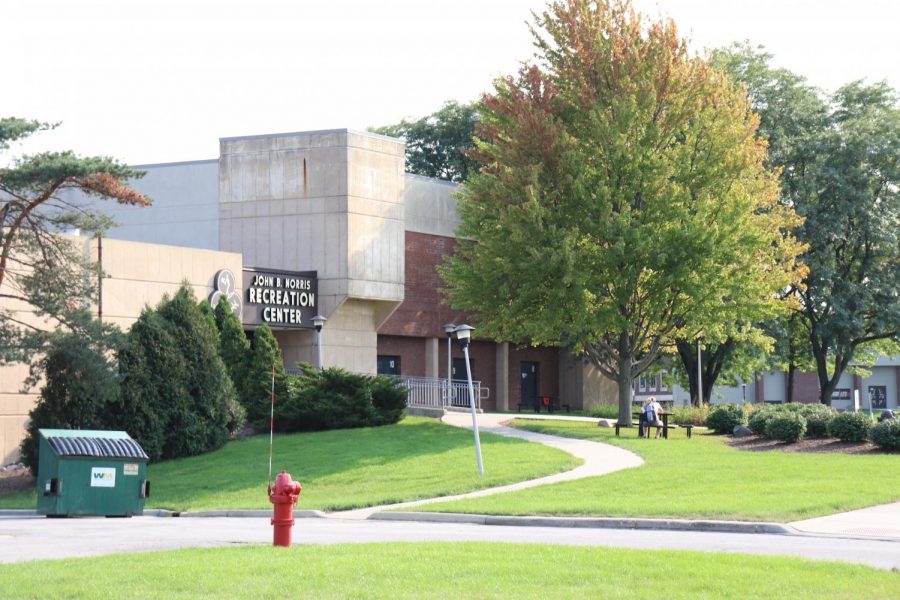 The Norris pool is where the Girls' Swim Team practices, but practices were canceled for a few days when one team member tested positive for Covid-19.

There are still whistles blown, water splashing, and the “beep” to start races. But the stands sit empty, and teammates cheering on deck are subdued by masks and the required 6 feet of separation between them. According to senior swimmer Lauren Swartz, “[The pool] looks like a ghost town.”

Despite the considerable disruptions due to COVID, the girls’ swim season is going well.  The team is still allowed to practice according to their normal schedule, which means hitting the pool everyday after virtual classes. The girls have also been attending local dual meets, which gives swimmers opportunities to compete and improve their personal records.

There was a brief suspension of practice in early September, due to a positive COVID-19 test result on the team. Practices were shut down for four days, while the pool was cleaned and more tests were given. At this point, practice has resumed to normal, and the potential crisis was averted.

Due to continued COVID concerns, though, all swim meets have particular limitations that limit the risk of infection. Only fifty people are allowed on the pool deck at one time, and there are no relays. For some meets, the Junior Varsity and Varsity groups have to compete at separate times so that there are fewer people by the pool at once.

According to Swartz, these limitations are making this season a difficult one for many swimmers.

“The meets are usually the highlight of the week for the team. The enthusiasm and cheering on deck from the coaches, parents, and teammates was always my favorite,” she said. Now, with a lack of energy on the team, “the racing spirit is almost taken away.”

Another strange part of the meet atmosphere is the lack of spectators.  IHSA regulations prohibit the presence of spectators at all competitions in order to decrease the chance of the virus spreading. This is equally frustrating for many parents in addition to swimmers.

Betsy Mruk is an East parent who has two daughters on the East team. She described that being unable to watch the swimmers in-person is hard, because it leads to a feeling of disconnection between swimmers and their parents. Usually, Mruk said her favorite part of the swim season is “the anticipation of the meets. [She loves] gathering up the family in orange and black and packing up the stands.”

However, a lack of spectators does not seem to be hindering swimmer performance. Varsity coach Julia Oelslager said that she is “very impressed with how the team is performing.”

At the recent meet against Neuqua Valley, Oelslager said many girls had “lifetime best performances, or close to it.” In general, she thinks that the season is going “better than ever imagined.”

The swimmers have competed in multiple dual meets so far. They put up particularly good times versus Benet Academy, whom they beat with scores of 126 – 43 on the junior varsity level and

In a non-COVID year, the team would be working to prepare for the end-of-season championship meets. However, the rapidly evolving nature of the pandemic means that there is not yet word on whether Conference, Sectional, or State competitions will take place this year.  The hope is that those meets will still be held, just under unique rules.

“Currently, we are functioning week by week,” Oelslager said. “Coaches and athletic directors are working together to make sure every swimmer and diver is able to participate in some sort of championship meet.”

Past the championship season, many swimmers, parents, and coaches are thinking further into swimmers’ futures in the sport.

Swartz has committed to swim at the University of Wyoming next year. Her teammate, Molly Yetter, has also committed to swim collegiately at the University of Illinois. However, Swartz said that she thinks COVID has “definitely impacted a lot of athletes who want to continue their sports in college” because of a lack of opportunities to promote themselves during their high school or club seasons.

Swimmers have gotten lucky when it comes to college recruiting, though.  Last year’s season was not cut short by COVID, unlike most of East’s other sports.  One thing that has been affected for many, however, is the memories they will carry of their season, specifically for seniors.

“I went through the years of the swim team knowing all the senior traditions that they got to participate in,” Swartz said. “I know we are trying to make it as ‘normal’ as possible, but I wish it was everything I’ve seen since I was a freshman.”

Mruk confirmed these concerns. She said that she thinks the “hardest aspect for swimmers would be the limitations placed on engagement,” regarding events like team-builders. At least for her swimmers, she knows that one of the most important parts of high school swimming is the atmosphere. “The girls look just as forward to the bonding moments as they do the competition.”

There are positives for swimmers, though, looking forward.

“I think [this season] will show the swimmers their ability to adjust and accommodate as they move forward,” Mruk said. “As many of them move on to swim [in college], the programs will be different and this change will hopefully prepare them for their future.”

This season, East’s swimmers have to adjust on many fronts. However, Oelsalger wants all athletes to know that “the best thing we can do is stay optimistic and only focus on what we can control.” For her swimmers, she said she has been telling them to “take each day and practice one by one. Give all you can in that moment.”