OPINION: How Secure is TikTok? 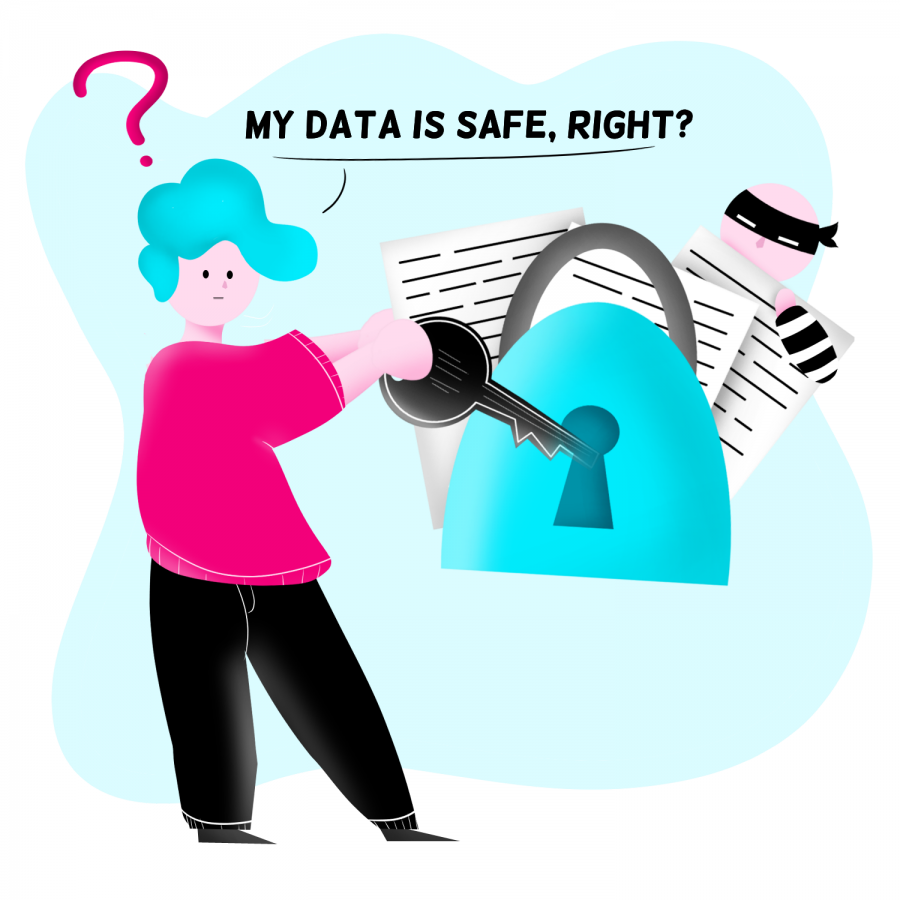 Many media users like on Tik Tok have been questioning whether their private data is truly private.

If someone told me about six months ago that TikTok was going to be or might be banned, I wouldn’t have cared. However, after living through an anxiety-filled six-month quarantine filled with very few in-person social interactions, hearing that same news about something that has served as an escape from the very real stresses of the present-day, alarmed me. Other than people like myself, opinions vary widely on the app disappearing from America.

When Abby Hanson, a sophomore, first heard the news, she said that she “…wasn’t disappointed or angry” adding that, “[She] wasn’t going to die or anything”. She did feel like, “His (The president’s) reasons weren’t very valid,” and that “it [was] pointless to take down considering climate change and coronavirus.”

While it does seem like the ban has been averted through a deal between TikTok, Walmart, and a company named Oracle, the status of TikTok isn’t entirely set in stone. According to CNN, despite the president’s blessing on the deal, the ban was going to go into effect on September 27. TikTok countered this with a legal challenge, and the federal judge and the ban was temporarily blocked, and any deadline is postponed indefinitely. Unless you have the time to slog through news reports, misinformation, and Justice Department memorandums, the details around the true dangers of the app, censorship within the app, and the true motives behind a real or potential ban of TikTok’s downloads in the US, all remain very murky.

Let’s start with what may be the easiest question to answer which is, does TikTok actually pose a severe security threat to our country?

Everyone knows this, but TikTok is popular. Wallaroo Media says that 800 million people have the app and ten percent of those users are actually in the US, so if it truly does steal information from 80 million different people in the United States, then it definitely should be banned.

Ostensibly, though, the app actually isn’t any more invasive than all of the others we use on a daily basis. In an interview with Wired magazine, iOS security expert Will Strafach stated that “[TikTok] appears to collect very standard analytics information” and that in context “TikTok appears to be pretty tame compared to other apps.” Still, according to that same article, the “standard analytics” collected are things like your phone’s hardware, time zone, and screen resolution. There was even a bug a few months ago that allowed the app to save whatever was in your clipboard, which is information that you’ve copied and saved to paste somewhere.

This may seem dangerous, but apps like Facebook and Instagram also closely analyze your data and have had their own very public misuses of user data. In 2018, for example,  Facebook harvested the data of millions without consent to be used for political advertising by Cambridge Analytica.  Just a year ago, Instagram left its users vulnerable to attacks from hackers who could then steal users’ real names and phone numbers.

Well, if the app is harvesting some of your data, it’s possible that it’s taking that data and giving it to China, right? Actually, the Chinese government has little motivation to do this. The current presidential administration in China, led by Xi Jinping, has stated that “We want tech companies that can be global brands that can compete in markets outside of China.” Committing mass espionage and purloining the data of millions could jeopardize dream.  If other countries discovered such actions, they would be forced to ban Chinese apps due to threat of national security.  In short, it’s in China’s best interest to refrain from collusion with tech companies.

There’s also another important point: the value of data from pre-teens and teenagers, the largest active group of users on TikTok in the US, is of little to no use to the Chinese government. Pre-teens usually don’t have jobs and according to the US Bureau of Statistics, the employment of teenagers peaked at just 46.7 percent this year. The likelihood that TikTok poses any real danger to the majority of people using the app is extremely low and isn’t something that should worry its users. The one worry they should have is censorship both domestically and abroad from the app, because the app still does have several ties with China, which still has potentially negative connotations for its users, but that’s a topic for next week.

In comparison to other apps, even domestic ones, TikTok doesn’t appear to be an exception that could harm us and steal our private information, but instead a part of the dangerous norm that tech monopolies have been pursuing for years. What punishment did Instagram or Facebook get? They certainly weren’t banned, so TikTok shouldn’t be either. Sure, it’s not totally harmless.  Companies from China and Silicon Valley shouldn’t leave their users vulnerable or steal their data, but it does mean that it’s not any more dangerous to you than apps from the US and that we should be able to use it as carefully as we use all the other apps in our life.